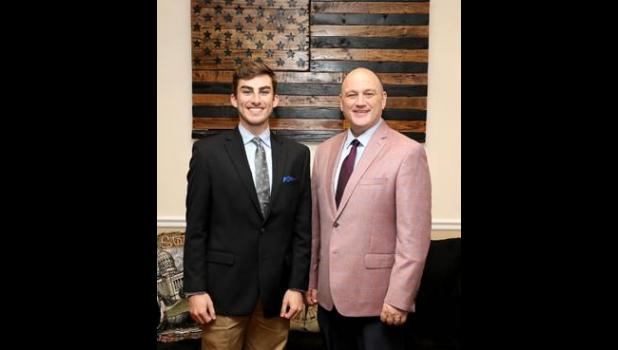 The State of the State

It was a short, but full week at the State Capitol. We got a late start due to the Martin Luther King Jr. holiday, but we made up for lost time with a busy schedule of committee hearings and a joint session with the House of Representatives to hear the governor deliver his State of the State address. During his remarks, the governor highlighted Missouri’s economic success over the past year and laid out priorities for the coming year.

Declaring that “Missouri is strong today and will be even stronger in the future,” the governor touted our state’s low unemployment rate of 3.5% — lower than the national average and below our pre-pandemic level. He also provided a list of business expansion successes and new site developments across Missouri. We have a lot to brag about, with our state ranking near the top of the nation in on-the-job training, apprenticeships and new manufacturing facilities, among other metrics. With low cost of doing business and the third lowest business tax rate in America, he said our prospects for future growth are excellent.

For many of us in the audience, one of the highlights of the speech was the governor’s promise of a tax cut in the coming year due to a law the General Assembly passed, and I voted for. He said Missouri’s income tax rate would decrease to 5.3%, a new low. As the speech continued, the governor outlined a number of spending requests he would forward to the Legislature. Many of these programs are desirable and would no doubt benefit communities — $250 million for safe drinking water and wastewater projects, $400 million for broadband expansion, $600 million for capital improvements at colleges and expanded services for children with autism are just a few examples. Worthy or not, the bottom line is staggering. The governor’s proposed operating budget for 2023 totals more than $46 billion, by far the largest in Missouri history, which gives me cause for concern.

Defenders of all this spending will surely remind us that many of these programs will be paid for through the federal infrastructure bill recently passed by Congress or by record transfers of money to the state through the various pandemic-related stimulus programs. In my opinion, that’s a small consolation, as federal spending still represents taxpayer money or, more accurately, debt the federal government expects future generations to bear. There are no free lunches, and every dollar government spends is a dollar taxpayers don’t have for their own families. You can be sure that I, as a member of the Senate Appropriations Committee, will be looking at the numbers closely as we prepare next year’s budget.

The 2023 operating budget is just part of the picture, however. This week, the Appropriations Committee also got a look at the governor’s 2022 supplemental budget. This spending bill addresses unexpected expenses and adjustments to be considered as we near the end of the fiscal year. This year’s supplemental budget calls for $5.4 billion of additional spending on top of the $35 billion already appropriated for the year. Included in this request is a 5.5% pay raise for all state employees, which the governor says is needed to attract and retain government workers. The supplemental request also includes $1.8 billion for Missouri’s expanded Medicaid program. Again, we’re assured that funding for much of the governor’s wish list comes from federal stimulus money, but conservative members of the committee, myself among them, pushed back seeking reassurance we aren’t setting ourselves up for ongoing expenses we can’t afford in the future.

Meanwhile, over in the House of Representatives, decisions were being made that will impact Missourians for the next decade. The House finalized its version of the congressional redistricting map. My personal belief is that the map being proposed squanders an opportunity to increase majority party representation in Washington. I supported a redistricting plan that would, I believe, more accurately represent the political realities in Missouri. Unfortunately, that is not the map the Senate received from the House. The Senate will now take up the redistricting bill.

In other committee activity, I was proud to present two important economic development initiatives this week. The Economic Development Committee, which I chair, heard testimony on Senate Bill 732, the “Show MO Act,” and Senate Bill 733, the “Entertainment Industry Jobs Act.” The first of those two bills may seem familiar, as I have filed similar legislation for several years now. Senate Bill 732 reauthorizes a lapsed tax credit for film and television production in Missouri. No significant movie production projects have come to Missouri since “Gone Girl” was filmed near Cape Girardeau in 2013. That’s the year the previous film tax credit expired, and Missouri begin losing out to other states that provided incentives to film crews. My legislation would make our state attractive to film makers again, and perhaps reclaim some of the economic activity we’ve lost to other states.

The other economic development bill I presented this week, Senate Bill 733, is something completely new and truly exciting. As you read this report, there is construction underway in eastern Missouri of a 300,000-square foot studio and rehearsal space that will host some of the biggest names in music entertainment. The $150 million facility, located on a 32-acre complex near Chesterfield, will provide a venue for touring acts to rehearse and develop their stage shows before going out on tour. The developers broke ground on the studios and rehearsal facility in November and the governor mentioned this project during his State of the State speech as an example of economic development success in Missouri. My legislation would provide a tax incentive to the artists who utilize the facility and bring jobs and economic activity to Missouri.

Finally, I’d like to introduce Patrick Finnane, who is interning in your 21st Senatorial District office this session. A Warrensburg native and Mizzou senior, Patrick will be answering the phone and assisting with your constituent issues, while learning the legislative process first hand. Please welcome Patrick to the team.

As always, I appreciate hearing your comments, opinions and concerns. Please feel free to contact me in Jefferson City at (573) 751-4302. You may also email me at denny.hoskins@senate.mo.gov.