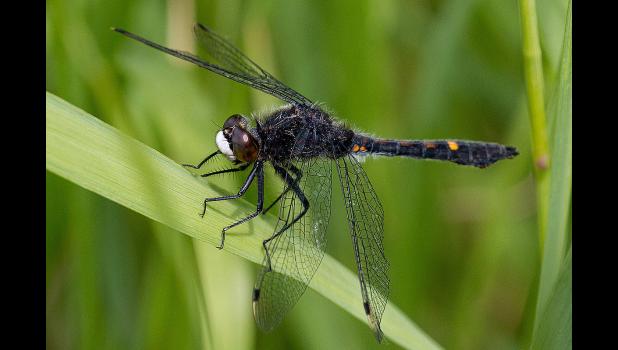 The Outdoor Journal by Kyle Carroll

As we move into mid August, Purple Martins have gathered in large flocks and Bluebirds and Robins are fattening up on the Grey Dogwood berries. Insect populations are peaking out as well. A half dozen large green dragonflies were hunting around my front porch this evening, putting on a show in the late afternoon sunlight.

Dragonflies are interesting creatures. According to a Blog called ThoughtCo, “Long before the dinosaurs roamed the Earth, dragonflies took to the air. Griffenflies (Meganisoptera), the gigantic precursors to modern dragonflies had wingspans of over two feet﻿ and dotted the skies during the Carboniferous period, “ millions of years ago. A dragonfly with a two foot wing span would have made some noise flying I would think.

When you have a chance to look at a dragonfly up close, you can't help but notice their eyes. ThoughtCo says,“Relative to other insects, dragonflies have extraordinarily keen vision that helps them detect the movement of other flying critters and avoid in-flight collisions. Thanks to two huge compound eyes, the dragonfly has nearly 360° vision and can see a wider spectrum of colors than humans.”

They are also masters of flight. The aerial show I witnessed was possible because,

“Dragonflies are able to move each of their four wings independently. They can flap each wing up and down, and rotate their wings forward and back on an axis. Dragonflies can move straight up or down, fly backward, stop and hover, and make hairpin turns—at full speed or in slow motion. A dragonfly can fly forward at a speed of 100 body lengths per second (up to 30 miles per hour)

Pretty impressive. Some people refer to these insects as “nature's drones.”

With the superb eyesight and superb flying skills, the dragonfly is a very efficient predator. As adults, dragonflies feed on other live insects. They aren't picky eaters. They'll eat any insect they can catch, including other dragonflies. Midges and mosquitoes make up the bulk of their diet, which makes me happy, but dragonflies will also prey on flies, bees, beetles moths, butterflies, and other flying insects.

As summer begins slowly to wind down, don't miss the dragonfly air show in your back yard.