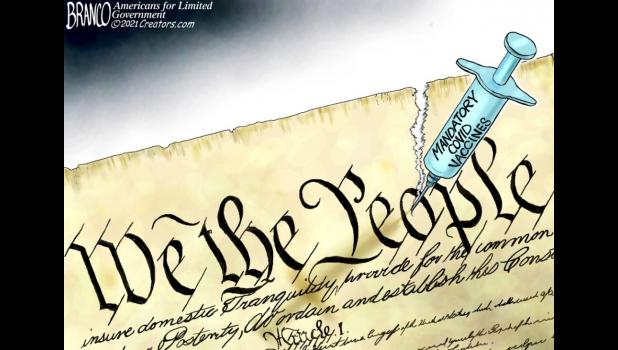 Last month, the Supreme Court blocked the rule by the Occupational Safety and Health Administration (OSHA) requiring private employers to compel 80 million employees nationwide, and continued to allow enforcement of the second rule by the Department of Health and Human Services (HHS) requiring 17 million health care workers who work for an employer with Medicaid and/or Medicare patients.

“After February 18, 2022, government funding will expire and congressional Republicans must once again decide whether they will vote to fund a federal government that is enforcing tyrannical COVID-19 vaccine mandates on the American people,” Roy and the co-signers wrote.

Roy added, “Congressional Republicans cannot continue to abdicate their Article I duties in hopes the judicial branch will rule in favor of the American people. Therefore, we the undersigned refuse to consider supporting any federal government funding vehicle, be it a continuing resolution or an omnibus appropriations measure, that funds the enforcement of COVID-19 vaccine mandates at any level of government.”

Here, Roy is noting that with the split decision by the Supreme Court, even though the vast majority of private employees have been spared the mandates, health care workers are still in the crosshairs for being fired over their vaccination status. At this point, they either got the vaccine or have already been removed from their positions one way or another.

Unless Congress intervenes. Especially since in the ruling allowing the HHS rule against health care workers to remain in effect, Justice Brett Kavanaugh cited on 42 U. S. C. §1395x(e)(9) that allows the HHS Secretary to promulgate “requirements as [he] finds necessary in the interest of the health and safety of individuals who are furnished services in the institution.”

On the surface, that appears to be a fairly broad authority given to the Health and Human Services Secretary — given by Congress. And if the Supreme Court is saying that it is a political question with which the elected branches have discretion — that is, Kavanaugh is not persuaded to change his mind — then, Roy is right, that barring a change of heart by Biden, the only way to undo or alter the policy would be for Congress to intervene.

Using the funding bill can be particularly effective since by prohibiting funding for the mandates, they become unenforceable. Individuals cannot be bound by a federal mandate if Congress repeals it.

Besides being a dramatic expansion of federal power over the lives of American citizens without much basis in the Constitution — aren’t the mandates an unjust deprivation of liberty without due process of law, especially since Congress never authorized them? — whatever necessity might have been perceived just a few months ago seems to be waning as the Covid omicron variant has become the most pervasive.

In short, almost everyone getting Covid is getting omicron. In fact, despite an adult vaccination rate of more than 87 percent — over the age of 5 is 80 percent and the entire population is 75 percent — Covid cases peaked at 7.1 million a day on Jan. 1, according to projections by the Institutes for Health Metrics and Evaluation (IHME). That was 14 times the amount of Covid cases in Dec. 2020, when cases peaked at about 502,000 a day, when the vaccine had not yet been distributed.

But the numbers are headed in the right direction — and they’ll continue on that trajectory whether or not the remaining 25 percent of Americans who have not yet been vaccinated, including children under the age of 5, did so.

That is not to downplay the efficacy of the vaccine at reducing hospitalizations and boosting immunity. Full disclosure: My entire family was vaccinated. I looked at the numbers and I came to my own conclusions, and made my own decision, as is the right of every American. I think they worked, and I for one, was very skeptical in 2020 that it would.

And thank goodness the virus was not more widespread than it was in 2020. If 7.1 million Americans would have gotten Covid every day in April 2020, before it had mutated into less deadly variants, fatalities could have reach almost 1 million during the peak.

But the fact is that it is not 2020 anymore. And perhaps Congress should begin to recognize that fact and consider Rep. Roy’s proposals. Life needs to get back to normal, not be governed by the unnecessary dictates of an administration that acts like it never will.

Robert Romano is the Vice President of Public Policy at Americans for Limited Government Foundation.