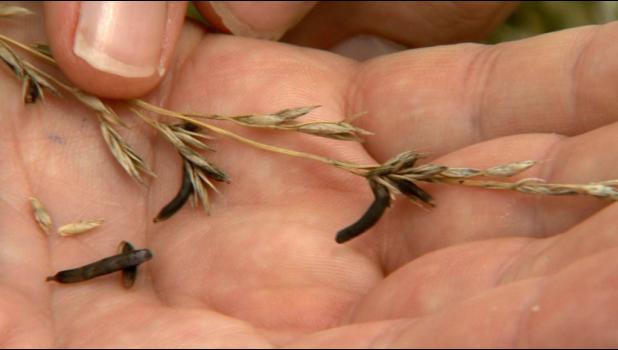 Be on lookout for ergot

Ergot can cause severe illness and death in livestock, especially cattle and horses. MU Extension livestock specialists reported spotting yellow syrup drops called honeydew in flowering seed heads the week of June 6. Honeydew, an early sign of infection, hardens and turns into dark ergot bodies, which look like mouse droppings and are up to 10 times the size of the grain.

The toxic fungus infects the surface of grasses and cereal crops. Ergot can also infect cereal grain screenings, distillers and biofuel byproducts. It does not infect corn.

Ergot poisoning from eating infected crops or feed causes “everything we don’t want to see” in livestock, Roberts says. This includes poor weight gain, poor milk production, poor reproduction and even death. “People think it is fescue toxicosis,” he says. “But ergot is on all the grasses with seed heads this time of year, not just fescue.”

·  Hair loss and reddening around tops of hooves.

·  Sloughing of hooves or parts of limbs.

“Ergotism is like fescue toxicosis on steroids,” Evans says. It is not nearly as dependent on ambient temperature. Clinical signs of hoof and tail switch sloughing during the late spring and summer are generally indicative of ergot, he says.

Rain delayed haymaking this year in much of the state. Some forage producers may be tempted not to cut late hay because they think it will be poor quality. Cut it anyway, says Roberts.

“If you don’t cut it, those seed will develop ergot bodies,” he said. “Yes, cutting late creates the potential to make bad hay. But remember, the toxicity of the hay may be cut in half by the time you feed it, and ergot bodies may fall off during the cutting and baling processes. Put that hay up as soon as you can.”

If you see ergot, Roberts recommends the following:

·  Ammoniation may be called for.

Check different areas of a pasture, as ergot may appear in some areas and not others, says Roberts.

Another pasture problem that goes hand in hand with wet springs is bloat-causing white clover. Large amounts of white clover in pastures suggest that conditions are also right for ergot, says Roberts.

Learn more about ergot from Roberts and Evans at cafnr.missouri.edu/2013/07/argh-ergot.

To learn how to improve grasslands, visit the NRCS+MU Grasslands Project webpage at extension.missouri.edu/programs/nrcs-mu-grasslands-project.