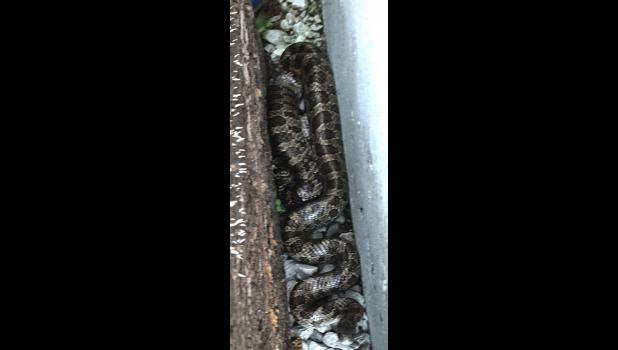 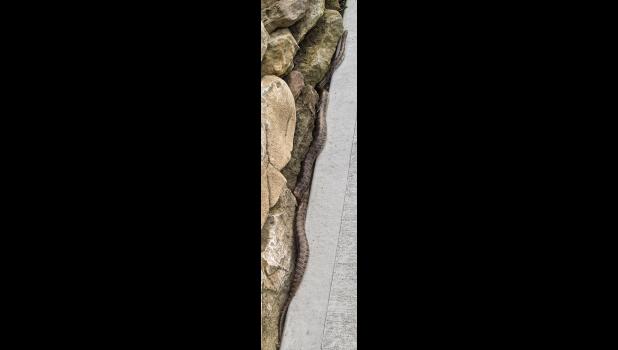 If you are deathly afraid of snakes, you might want to keep an eye out for them. The ground has warmed up enough to bring them out of their winter hibernation and into your yards.

This bullsnake was found on my sidewalk that leads to my front door. Here’s some information you may or may not know about bullsnakes:

The bullsnake is a large, nonvenomous snake, and is one of the largest/longest snakes of North America and the United States, reaching lengths up to 8 ft. They are usually yellow, with brown, white, black or sometimes reddish blotching.

Bull snakes don't have a rattler. It may sound like they do when you get close to them, but that is them vibrating their tails forcefully. Rattlesnakes elevate their tails when they are rattling, while a bull snake will keep their tails low to the ground. This snake was definitely shaking its tail.

Bull snakes are powerful constrictors and feed on small mammals such as mike, moles, rats, gophers, and ground squirrels. I would call this one of their good qualities. Their climbing proficiency enables them the ability to raid bird nests, eat the eggs, babies, or nesting mother bird. One snake can eat five small birds within 15 minutes. Smaller bullsnakes will rely on small lizards, frogs, and baby mice.

Bullsnakes will breed in March or April and the female will typically lay 12 eggs in April, May or June in sand or other protected areas. The eggs are elliptical, leathery, rough, sticky and up to 70 mm long, and will hatch in August or September. Baby bullsnakes are 20–46 cm at hatching. Their color is grayish until after their first shedding of skin.

This snake made his way into the rocks before I could get my hoe.