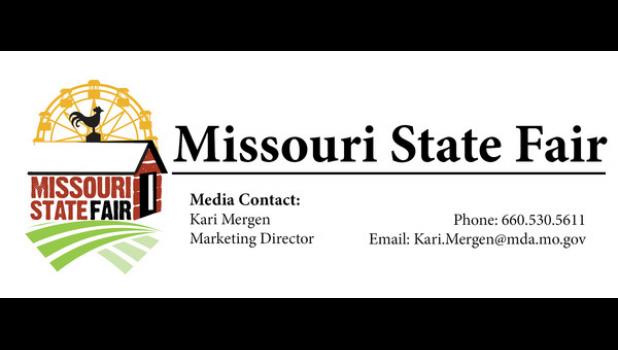 Over 330,000 Visitors Return to Missouri State Fair After Focusing on Youth Livestock Shows in 2020

“Agriculture is Missouri’s top economic driver, and the Missouri State Fair is an important time to celebrate the efforts of our farmers and ranchers as well as the young people who work hard on their projects year round,” Governor Parson said. “Missouri State Fair Commissioners, staff, vendors, exhibitors, and everyone involved should be proud of their efforts to make the 2021 Fair a success. It has been a challenging year, but it was great to welcome thousands of fairgoers back to the Fairgrounds."

"Missourians from all across the state know that summer just wouldn't be complete without spending a few hot August days at the Missouri State Fair in Sedalia," Governor Parson continued.

As a third-generation farmer and lifelong supporter of the Fair, Governor Parson visited Missouri's number one agriculture showcase on multiple days in 2021, including participating in Opening Day ceremonies and delivering the keynote address to active military and veterans on Military Appreciation Day.

During his visit, Governor Parson had the opportunity to view some of the Angus cattle shows and visit with several of the thousands of youth livestock exhibitors. In total, there were 23,787 show entries at the 2021 Missouri State Fair.

The Missouri State Fair celebrated Missouri’s Bicentennial with various displays across the Fairgrounds. Governor Parson and First Lady Teresa Parson visited those displays, including the Bicentennial Quilt in the Womans Building and the Struggle For Statehood display in the Mizzou Central Building.

“It was terrific to welcome a full crowd back to the Missouri State Fair this year,” Missouri Department of Agriculture Director Chris Chinn said. “The Fair is the showcase of Missouri agriculture and our state’s largest family reunion. I am extremely proud of the work carried out by the State Fair staff to make this year’s event spectacular.”

“It was great to have the traditional Missouri State Fair back again this past August," Missouri State Fair Director Mark Wolfe said. “It was exciting to see our youth exhibitors showing off the best of Missouri agriculture, along with all the other friends and families we missed last year. Thanks to all the staff at the Missouri Department of Agriculture, State Fair staff, our dedicated Fair-time staff that returns year after year to help put this event on, and certainly to Governor Parson and the legislature for their continued support of Missouri agriculture and the State Fair.”