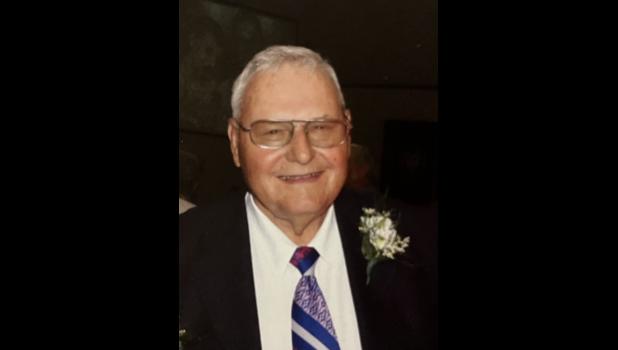 Dean Robert Bowers, 90, Hamilton, MO, passed away on November 9, 2022, at the Cameron Regional Medical Center, Cameron.  Dean lived in Caldwell County, MO, most of his life.

Dean was born on July 10, 1932, in Kidder, MO, to Maurice and Pearl (Whitehead) Bowers.  He attended school in Kidder, and graduated from the Hamilton High School in 1950.  He then attended the University of Central Missouri.  Dean honorably served his country in the Air Force during the Korean Conflict and was stationed in France.  Dean worked as a policeman for the Kansas City, MO, police department and retired in 1988.  He also was a farmer and drove a bus for the Hamilton R-II school district, Later he and his wife, Nancy, transported Amish community members and he worked part-time at Bram Funeral Home, Hamilton.

Dean was a member of the Hamilton Baptist Church where he served as a deacon, the Hamilton American Legion Post #285 and was a past commander, served on the Lick Fork Cemetery Board, a member of Gideons International, and a member of the Gas and Steam Engine Association.  He enjoyed organic farming, collecting tractors, antique treasures and old equipment, following football, and spending time with his beloved dogs.  Dean adored his family and spent precious time with his grandchildren following all of their activities.

He was preceded in death by his parents.

On August 31, 1951, he married Nancy Smith at the Langley Air Force Base in Hampton, Virginia.  They were blessed with 71 years of marriage and Nancy survives of the home.

In lieu of flowers, memorials may be made to the Lick Fork Cemetery or Gideons International.