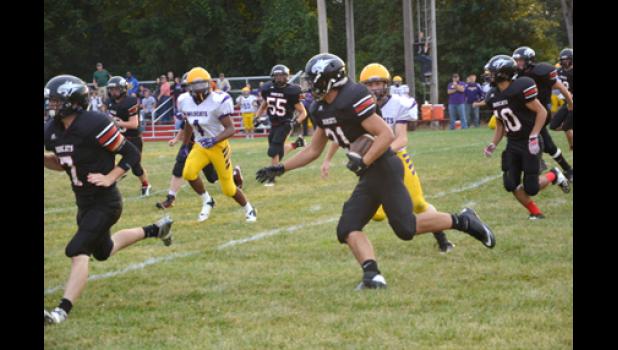 Friday night lights were sparkling bright in Braymer. The home-town crowd had to be pleased with the variety of offensive plays and the powerful defense that head Coach Craig Railsback has put together.

The Bobcats jumped ahead of Slater after the first possession with a touchdown pass thrown by  Wade Phillips to  Austin Hall. Drake Parker kicked in the extra point. Slater couldn't get anywhere on their possession and the Bobcats got the ball back. The offensive line paved the way for Senior running back Logan O'Dell to cruise into the end zone. Slater was able to convert on their next possession, but was held to 6. Slater then recovered a fumble to start the 2nd quarter.

The stellar defensive line was not going to let Slater score and stopped their drive on the 4th down. Phillips threw a 50 yard bullet to Hall for his 2nd receiving touchdown. Once again Parker kicked in the extra point. The defense battled for a little while until the Bobcats got the ball back with a little over 2 min. in the 2nd quarter. Phillips  connected with Hall for a 68 yard touchdown for his 3rd touchdown of the night. Braymer went into the locker room up 26-6.

The 2nd half proved to be more of a defensive game on both sides. The defensive wall of the Bobcats held Slater. Sophomore Jason Gates recovered a fumble in the 3rd quarter, but penalties kept backing  the Cats up. After losing the ball on the 4th down, Sophomore Gunner Ryals recovered a fumble that led to Parker nailing a 27 yard field goal to raise the Bobcats score to 29.

Come on out a watch a this Bobcat team, believe this you won't be sorry you did. Good luck Bobcats!