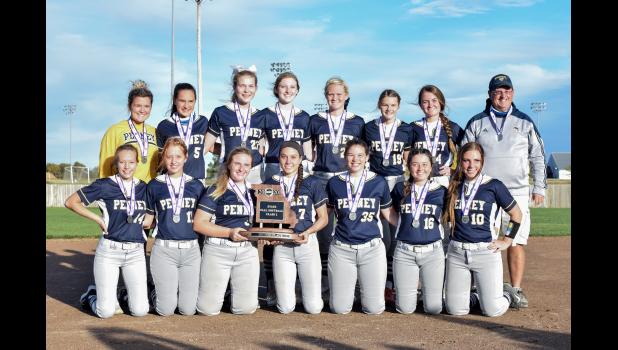 In 2011, coach Jim Dickey led the Penney High Lady Hornets to a 3rd Place finish in Class 2. In 2020, coach Dickey led Hamilton to their best finish in softball history when they made it to the Class 2 State Championship game.

It wasn't an easy road. First, the number 3 seed Hornets defeated the previously undefeated East Buchanan Dragons 5-0 in the District 7 championship game. Then they traveled to Creighton where they took down 20-4 Sherwood, 2-1 in the quarterfinals. Next, Penney played host to a 20-6 Monroe City team in the semifinals, which they defeated 10-3.

That leads us to the State Championship game on October 31st when they played the 23-3 Father Tolton Regional Catholic Trailblazers in Springfield. The game was scoreless through the first 3 innings. In the bottom of the 4th inning, the Trailblazers scored 4 runs on a double, a single, a sacrifice fly, another single, a walk, a third single, a passed ball, another walk, and a wild pitch. The Hornets had a chance to get back in the game in the top of the 5th inning when Julia Kanoy led off with a single up the middle. With 1 out, Kanoy stole 2nd base, and Morgan Hartley drew a walk. Lakelyn Shatto would later walk, loading the bases with 2 out. Unfortunately, Hamilton was unable to push any runs across in the inning. Penney would get on the board in the top of the 6th. Madi Allen walked with 1 out, and Hayleigh Huff reached base on a fielder's choice. Kanoy singled to load the bases. Allen scored on a ground ball out by Mary Brown. But that's all they got in the inning. Olivia Edwards gave Penney hope in the top of the 7th inning when she doubled to left field after 2 were out, but she was left stranded on the bases. Father Tolton got the win, 4-1.

The Trailblazers out hit the Hornets 4 to 3, and neither team committed an error. Hamilton left 6 runners on base, and Father Tolton left 4. Paige Bedsworth was the winning pitcher, completing 7.0 innings, walking 3 and striking out 16. Kanoy took the loss, throwing 6.0 innings, walking 4 and striking out 12. Kanoy also went 2 for 3 at the plate, and stole 1 base. Edwards' double was the only other hit in the game for the Hornets. Brown knocked in the only run for Penney. Allen, Hartley, and Shatto each walked once. Hamilton ends the season with a record of 18-9, but more importantly, 2nd Place in Class 2.

Congratulations to coaches Dickey and Demint, and the entire Penney High Lady Hornet softball team for a very successful, rewarding, spectacular, and unforgettable season! You have all made the Hornet Nation proud.