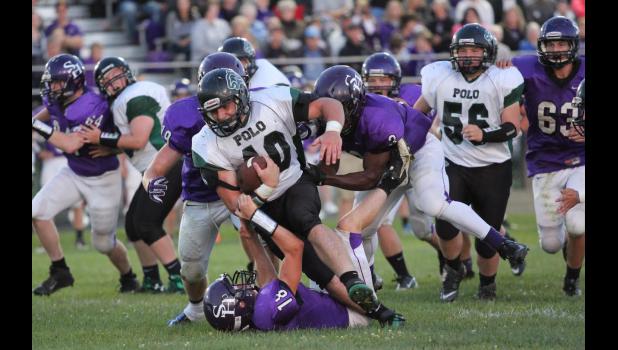 The Polo Panthers are having a winning season in 2015 and are ranked 1st in their district according to MSHSAA. Polo is now 3-1 on their season after losing to Lee Summit Christian Academy in their first home game 56-32. They beat Lathrop at home 48-45 in week #2, took the win from Gallatin 20-6 at Gallatin week #3 and last Friday night, they beat South Harrison on their field in a battle to the end 50-44.

Both teams remained close throughout the game until Polo pulled away from South Harrison in the third quarter and led by as many as 22 points. South Harrison found their fight inside and brought it to the Panthers closing the gap in the score to within 6 points. Polo is a small, scrappy team that never gives up and they proved that last Friday night as they held off the Bulldogs and took home the team's third win of the season.

The defensive leaders were: Jake Leonard with 14 tackles, Derek Faulkner with 12, Ty Parker with 10 and Drake Burton with 9. Coach Kyle Ross had this to say after his team dug deep and worked hard to bring home another Panther win, "I am so very proud of efforts on the night. That goes for our kids on the sidelines as well. It was a great evening for HS football and all of our kids were in tune all night. I really feel like emotionally this was our best game. We demanded every ounce of pride and passion that we could muster to be able to have a chance at beating an extremely talented opponent. We made mistakes, which we will continue to work to correct, however they were not effort mistakes."

This week is Homecoming week for Polo and they will be hosting the Princeton Tigers at 7 PM, Friday night at Shearer Stadium in Polo.